A belated happy Fourth of July to all.... we had a day. That's what I'll tell you. Get ready for a loooong, whiney post. Poor me. Boo hoo. If you want to nod off now I won't judge.

I tried really, really, really tried to do it all. I took the kids to downtown Lexington where they had a day full of events planned. My goal was to watch the parade, walk around the festival, find something fun for the kids to do, have lunch together, maybe a treat. Then come home and make a big bbq feast where hopefully Hottie would be able to join us. (he had to work. again.) And finish the night off with fireworks at home.

Well. When we got there it was 100 degrees. By the time we walked from the car to the festival (only 2 blocks) I started seriously wondering what would happen if I passed out from heat stroke. (yeah, 7 months pregnant here.) Ev proceeded to drink 2 bottles of water and her apple juice in a matter of minutes. But. We will see this parade, I thought. Only and hour away. Surely we I can pull this off for an hour. There was plenty to see and do. Margaritas around every corner (I have never wanted one more!).

Cut to me buying lunch that then proceeded to get spilled all over the top of the stroller as we tried desperately to find shade. Once in the shade Ev spilling one of the last Gatorades I brought not once, twice, but three times. Gone. Ok. Ok. Not a great day, I thought.

I have to say, the kids were troopers. I never heard a word of complaint from either of them. Although, they had NO interest in doing any of the bouncers, or crafts, or activities they would normally love. I think they just wanted shade and something cold as much as I did. 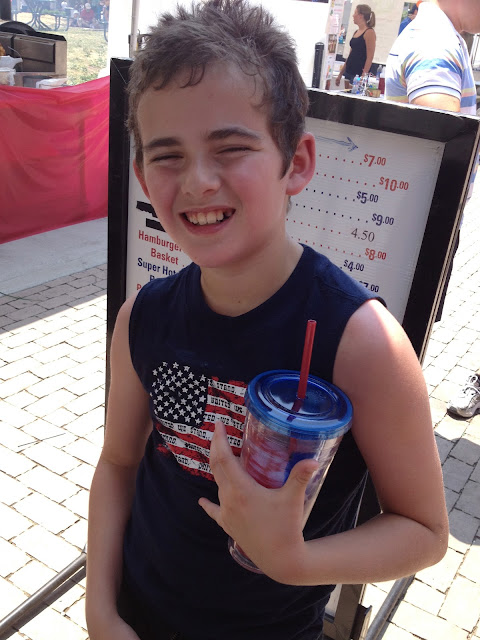 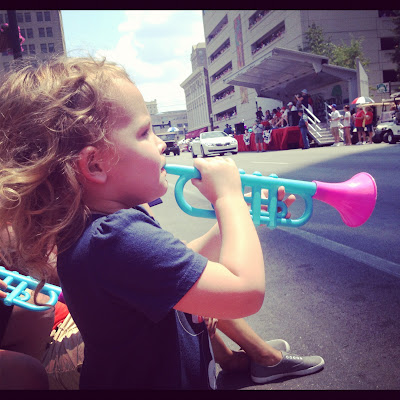 We ended up salvaging some lunch and treats and found a nice spot on the curb (again, 7 months prego, why do I think I am capable of cop-a-squat-ing on a curb for over an hour in 100+ degree weather while my toddler climbs in and out and in and out of her stroller? I really need to stop thinking I am superMOM. I am so NOT.) We watched the parade (No candy, by the way. Aren't hometown parades supposed to throw ungodly amounts of candy? I was kinda counting on that to single handedly redeem my kids day.) for a bit over and hour when I get a call from Hottie. He's been at work since 11 am the previous day... 27 hours. (Yeah, he's been working "a lot." I have another way of saying that, but it involves swearing and I try to keep the blog clean.) He lost his keys and can't get home. So I take one look at my overheated offspring and we leave before the parade ends.

Now we're home and Hottie sleeps and I try not to cry for the entire rest of the afternoon, because frankly I am dehydrated and can't afford to lose the fluid. (Thank you Ev, for drinking ALL of my water and then the extra water that I bought along the way.) :) Instead of a feast I crack open the frozen pizza, cuz nothing says the Fourth of July quite like DiGiorno. I try to pull it together that this day is so much less than I was hoping for. Try not to desperately miss my family and friends who we left behind, and think, why did we do that? Try not to focus on how this is the WORST Fourth of July I have EVER had. Try not to lose it and make my husband feel bad for working so much. Just like the day, I fail. I cry and cry and cry. and cry some more. I don't do well when holidays don't come together as planned. This is an epic failure & I am so tired and dirty from being outside & everything seems terrible.

Luckily, Hottie wakes up and stops me from crying with a big hug and offers of slurpees, and ice cream, and whatever else he can think of... all of which I decline... and you know it's bad when I decline those! He assures me that I did not make him feel bad & let's try to make it a fun night.... and doesn't say a word about why there are no hamburgers.

We wrap up the evening with some tiny fireworks out front. Things that remind me of childhood like the ones called flowers and sparklers. I am feeling better because for once Ev is in my lap, wrapping my arms around her (because she is a bit scared-- but I count it as cuddling.)(she never cuddles.). Nakiah is playing with his glow stick-light saber thingy & doing countless poppers. Hottie feels like he's 15 again, because that is the last time he lit his own fireworks.

As with any holiday what it really comes down to for me is being together... celebrating the occassion... doing something festive. ... and in the case of KY, where the fireworks are legal, not burning your new house down. We succeeded on a couple of those endeavors. So, that's that. Here's to hoping your fourth was a little more of a bang.
Posted by Elizabeth Gardner at 9:54 AM