Luckiest Girl in the World

Sometimes my husband makes me feel like I am the luckiest girl in the world...a lot of times, actually. But he has really outdone himself this time. Yesterday was our anniversary. While I was thinking we weren't exchanging gifts he was in the middle of a big surprise. Maybe I should go back in time for a bit here...

Three years ago as we were in the car on the way to Vegas to get married we started making promises. (One of the biggest reasons I love this man is that he ALWAYS keeps his promises.) We each thought of a couple of things that the other had to promise to do if they wanted to marry the other. His big one was that I would never make him give up his record collection. (EASY! I love that he has a record collection!) Mine was that we travel. I think my exact words were, "If you want to marry me you have to promise me that we will travel. Because I want to see the world." He said, "sounds good to me," all casual.

Yesterday while we were eating our shmancy Outback Steak (that's how we roll) he says to me, "I don't have a present for you, per se."
"That's ok, I don't have one for you either," I say.
"But, I DO have a surprise." He smiles coyly down at his horseradish crusted fillet.
"You DO?" I can't help but smile because he is a great gift giver.
He proceeds to hand me his phone and instructs me to read a work review he has written about himself. It talks about this difficult customer and how he has learned to bond with her while talking about travel. He found out she is a travel agent.....and then there is this sentence that says...."Now she is helping me plan a trip to Italy."
My eyes well up and I say, "huh?!" (Yes, eloquent as always.)
"What does it say?" he asks
"I THINK it says you are planning a trip to Italy!" I say trying not to drip tears of joy all over my salad.
"It says I am planning a trip to Italy for us."
(BEST HUSBAND EVER!)
(Now I am embarrassed because I am crying in an Outback Steakhouse.)

Turns out he has been planning for months now. He has learned that January is the absolute best time to purchase tickets and so we will book then and make our arrangements. He wants me to help him plan it out since I have ALWAYS wanted to go there and he wants us to do everything I hoped for. We will go for 2 weeks this time next year. I stare at him in gleeful disbelief. He tells me that he originally planned to learn the language so that he could tell me in Italian. (How romantic and adorable is that?) But I have been home so much lately that he couldn't do it on the sly.

So you see, I really AM the luckiest girl in the world. I get to go to Italy. Happy anniversary to me! (Oh yeah, and to him as well.)

Here is a layout about how we met. Not a day goes by that I am not glad I'm the kind of girl that had the guts to give that hot guy in a bar my number. 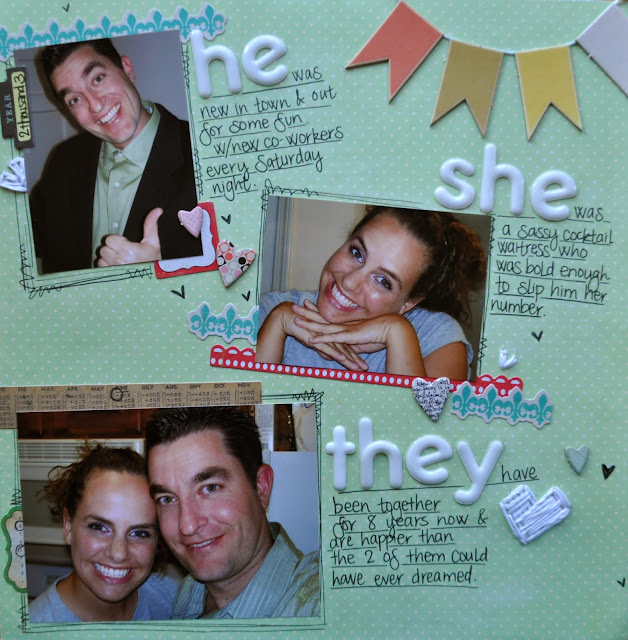 Posted by Elizabeth Gardner at 4:18 PM