For the past few years I've jumped on the Ali Edwards band wagon for the One Little Word concept. 2014 was: Resolve... one heck of a word. It felt depressing at the time that that was the word that seemed to fit the best.. but it was exactly what I needed to get through. and I did.

For a much needed shift in gears, in 2015 I chose: Happy. (Read about that here if you so choose.)
I surrounded myself with it. I put up 2 ft industrial signage stating, "HAPPY," in my dining room, where I could see it every day. I made an effort. I really thought about what could make me feel happy more regularly.. what things I already had in my life that filled me with joy. I opened my eyes and tried hard to see through the clouds. It worked.

Don't get it twisted. You know I have to keep it real.. I did have plenty of bad days (some weeks). Ones where I wanted to retreat into a shell of myself.. ones where I scraped by, getting just the bare minimum accomplished. You don't just go from suffering from depression to "deciding you're just going to be happy." I'm not saying it was like that. No light switch happened when I chose the word (sorry to report, my friends.).. but it did help. To change my focus. To open my eyes. To seek out ways to work within me so I could recognize the happiness all around. Sort of happiness by osmosis. (and lots of therapy. and drugs. and appropriate prescription medication.) After 2015 I can certainly say that I feel happier, more regularly.

SO. That was a nice start to feeling better. I feel closer to the "me" that I know I have been, and can be again. (which is a HUGE accomplishment if you're a resident of Depressiontown, USA.) but there is undoubtably room for more.

That's why this year I chose the word self-love.
(ok, ok, two words. I'm not usually a rule breaker.) 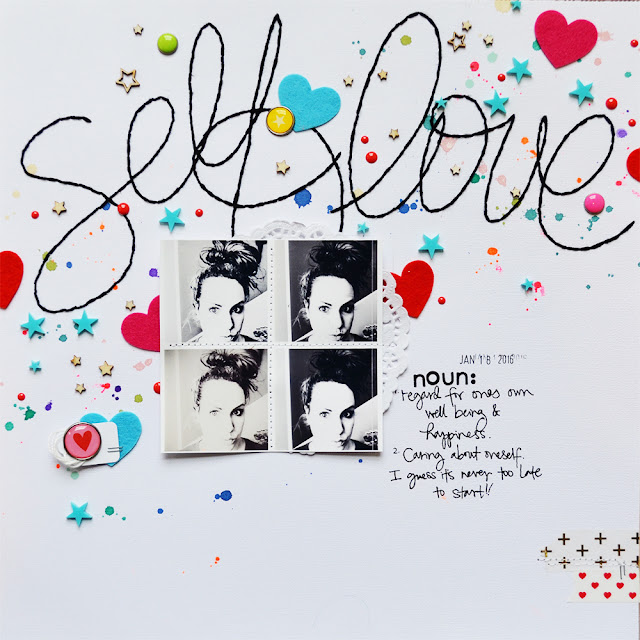 Above is a page I made about the word. (I'm basically sharing it with you to break up the novel this post is becoming and hoping you don't get bored and click over to online shopping until you finish reading.. if you do, I can't really blame you. Hello President's Day sales!)... 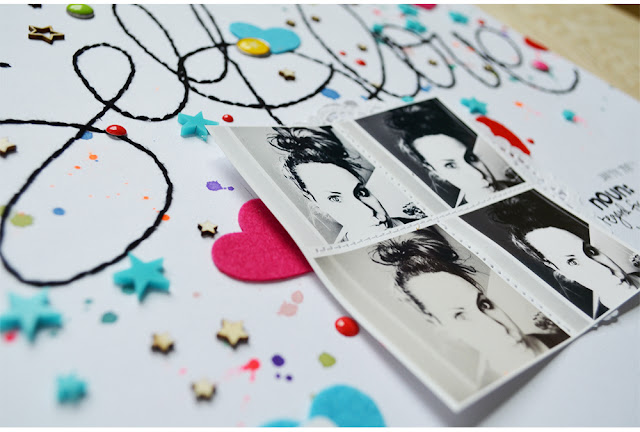 So now I'm going to be really real about why I would choose such a word(s).  & I'm not sharing because I feel I need to explain myself.. it's my word, and I can choose what I want to (sung to the tune of: It's My Party).. I'm sharing this candid information because maybe you can relate. Maybe you understand. Maybe you don't, but will find it nice to read about someone else's deeply scarred internal problems... instead of the beautifully painted mirages you mostly find in the blog world.

So here goes nothing...

I almost wrote hate. It's not that extreme.. but it might as well be, because it is, at times, debilitating. I would describe myself as a self-loather. Sure, I have some redeeming qualities.. sure, there are some things I do like about myself. But the bad outweigh the good, by far, in my mind.

My mind is a dark and lonely place. It bullies the crap out of me. Tells me I'm worthless. Unloveable. Dumb. Fat. Failure. A terrible wife and worse Mom. It tells me I can't do anything right and never will. It says that it doesn't matter how hard I try, I am still a pathetic loser. Basically, my mind is a giant asshole, and if it were someone I knew I'd tell them to piss right off. But somehow that doesn't happen.. because it's a part of me... ingrained during the shaping of my being. & that makes those self deprecating thoughts really damn near impossible to evict. I'd never in a million years use those harsh criticisms on anyone else. I'd never treat anyone like that. Yet I do it to me. I allow it to happen. and I believe it.

As a result, I am pretty terrible at taking care of myself, and putting myself first on any list of importance. When it comes to needs, I'm always last. (saying all of this from MY perspective, not saying this is how my family, or anyone else, expresses they feel.)

Here is an example of what I'm talking about: I have a really hard time buying things for myself. I almost never (seriously, maybe a handful of times a year) buy myself shoes or clothing at full price. "Ah! well, that's not terrible, that's thrifty!" you say. "Yes," I respond. "I like a good bargain.. (in fact for years I told myself that's why I do this..) but that's not why." If I'm being really -deep down, dig into my guts and spill them- honest.. I head for the sale rack 100% of the time because I don't believe I deserve something that is full price. I don't feel worth it. In fact it's gotten worse with the ongoing depression. Now if something isn't 60% off or more I won't even consider it. Like, the 30% racks aren't cheap enough. I walk right past.. even if it's something I actually NEED. Like, a winter coat or bras that fit.

Yet when it comes to the kids I don't really bat an eye. Sure, I still look for good prices (I'm not an animal) but if something is full price and that kid needs it, or wants/has earned it.. I get it. Hottie decides that he is going to become a runner and buys 3 head to toe new outfits.. (this happened, like, once. dude really isn't a shopper. but still.).. I don't even flinch.. I just sigh and think.. "huh. I could never do that"... (not in a -I'm mad at him for doing it- way. Just in a -that seems like a healthy mind and I wish mine worked like that-way)

So why did this post turn into one big, fix Elizabeth, therapy session? Self-Love. I need it. Badly. My inability to love myself has been a disservice to me for as long as I can remember. (Hell, I even spent a good amount of time being MAD at myself for not being capable of liking myself... beating myself up mentally for the abuse I was dishing out mentally. Hellllllo, Crazytown!) It's time to reverse the direction of thinking. Allow myself to take care of me the way I take care of my loved ones. Allow myself to see the good stuff in me, celebrate it... and acknowledge the flaws as just that.. flaws that do not define or dominate me. Open myself up to the possibility of not just liking, but maybe even loving, me.

Phew! So that overshare post just happened. (and now things are a little awkward between us.) If you made it all the way to the end, you're a rockstar. Thanks for reading my saga. I'll keep you posted on how it goes.

PS- I just had a visual of what Depressiontown USA, and it's residents, would look like.. I gotta admit, it made me chuckle.


Posted by Elizabeth Gardner at 9:01 AM