Do you ever come across something on your inspiration endeavors and think, "SHUT THE FRONT DOOR. THIS IS SO EPIC I HAVE TO RECREATE IT AND MAKE MY OWN!" Yeah, it doesn't happen to me often... but this one had me, hook, line, and sinker. I was scrolling innocently through Instagram and BOOM! There it was. The most. glorious. rainbow. quilt. ever. (In Elise Blaha's feed. @elisejoy) I knew the second I saw it that I had to make one...

but first I should probably figure out how to quilt, right?....

nah, I can wing it. i wasn't letting a little thing like, not having ever made a quilt before, stop me from... making a quilt... I had wanted to make one for quite some time and this was just the push I needed.

Elise has a cool write up about how she made hers, complete with suggestions on how much fabric in each color she needed. That was an awesome start. (the rest I learned from youtube. #killingit)

I started my quilting journey at JoAnns. Carefully selecting 6 shades of 6 different colors... and then apologizing profusely to the woman who had to cut each one. (am I the only one who actually apologizes for my patronage?) #weirdo This sight made me so happy though... oh! and I did this on a day where I could use a number of coupons at once (did you know they let you do that?) including a 20% entire order one. I spent $80. and saved $82. Pretty much winning life, at this point. 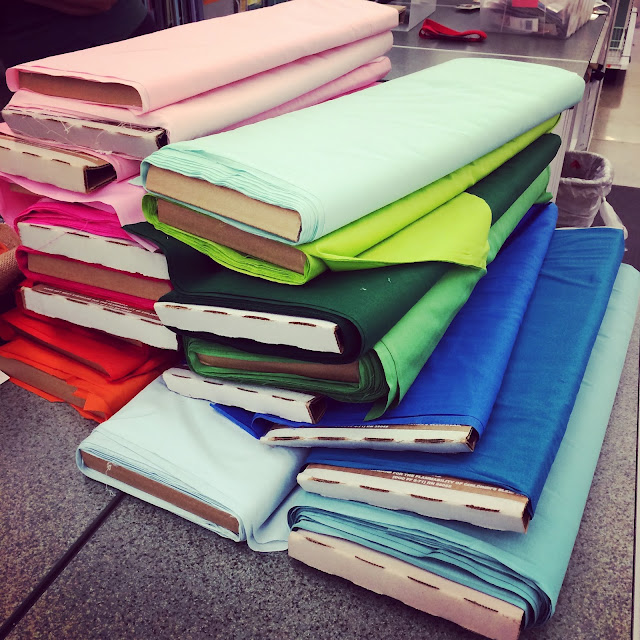 then I organized them and oohed and ahhhed over how cool this blanket would be.. and then immediately started to feel some serious heart palpitations because.. oh yeah, I still don't know what the heck I'm doing! and I just spent $80 on this project! 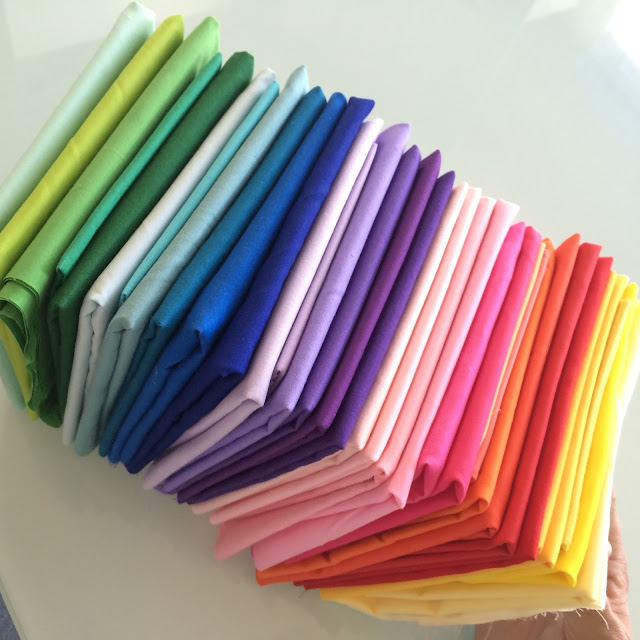 After calming my tits... I followed Elise's cutting directions, and youtubed through each step... and after 2 very tedious and hyper focused (if you know me, you're probably familiar with this version of me, and you know to just move over and let it happen. I'll recover when it's over.) days.. I had this...

My very first quilt! (that is so epic I can't even handle it.)(my arms hurt from patting myself on the back so hard.) Ok. maybe it's not the most epic thing on Earth.. but look! It's pretty cool. I'm a quilter! 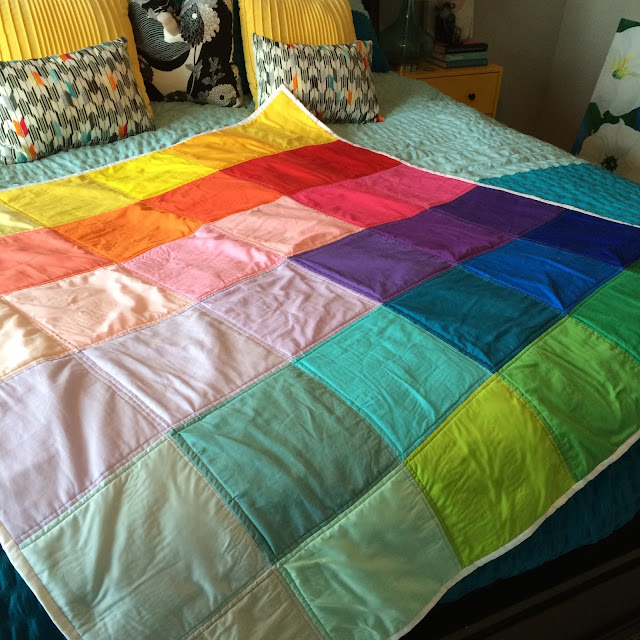 I originally made it for Ev, to go in her rainbow room... but this is the one and only moment she used it... in fact she has basically shunned it.... 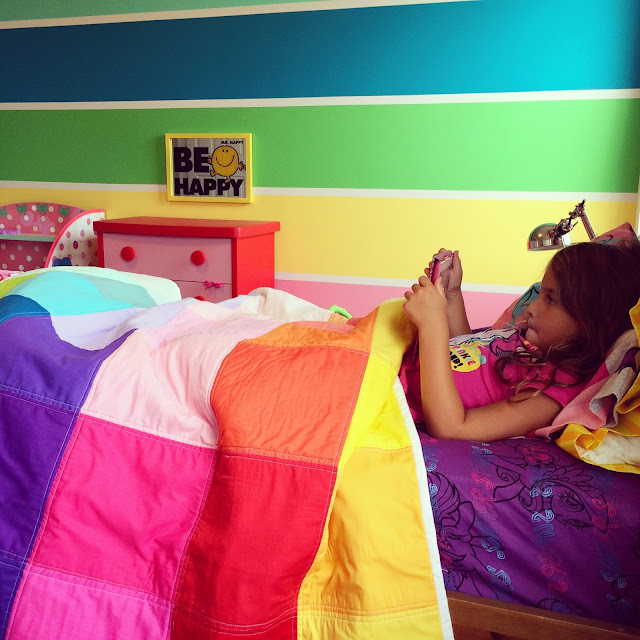 Dez seems to like it though.. and it still brings a swell of pride and a smile to my face. 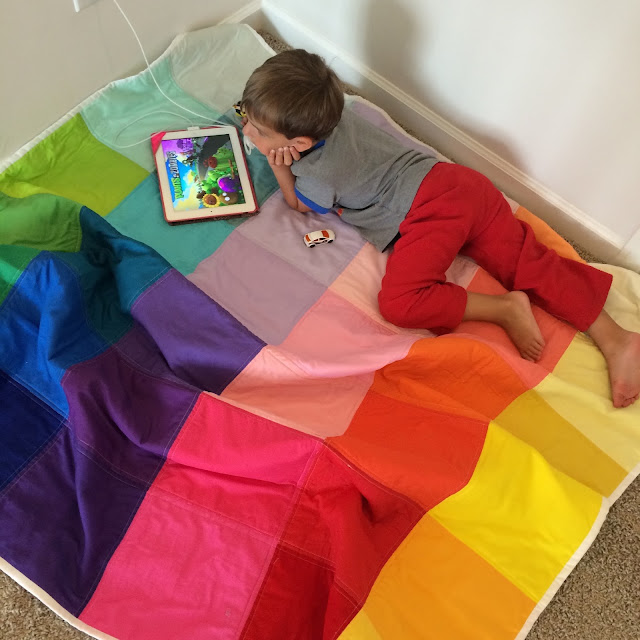 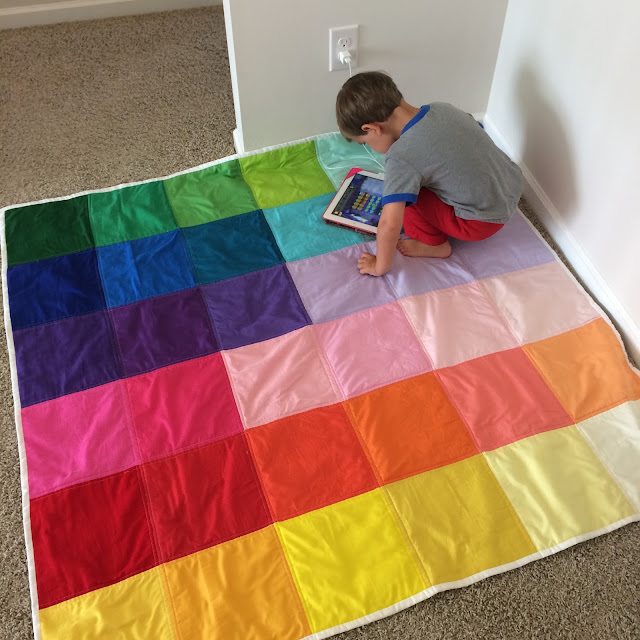 So the moral of the story is... if you see something and you want to make it because everything in the universe is shouting "YOU HAVE TO FIGURE OUT HOW TO DO THAT AND DO IT!" then instead of yelling back, "SHUT UP, UNIVERSE! YOU DON'T KNOW ME!" Just do it! It will be fun, and challenging, and you will probably have chest pains (just me?) and worry that you'll screw it up and never do a craft ever ever again in your entire life... but you will pull it off! and then you'll have a really cool thing.. that YOU made! Step outside of your comfort zone and do something fun! and for God's sake, do it on a good coupon day! (we can all be winners.)
Posted by Elizabeth Gardner at 10:38 AM